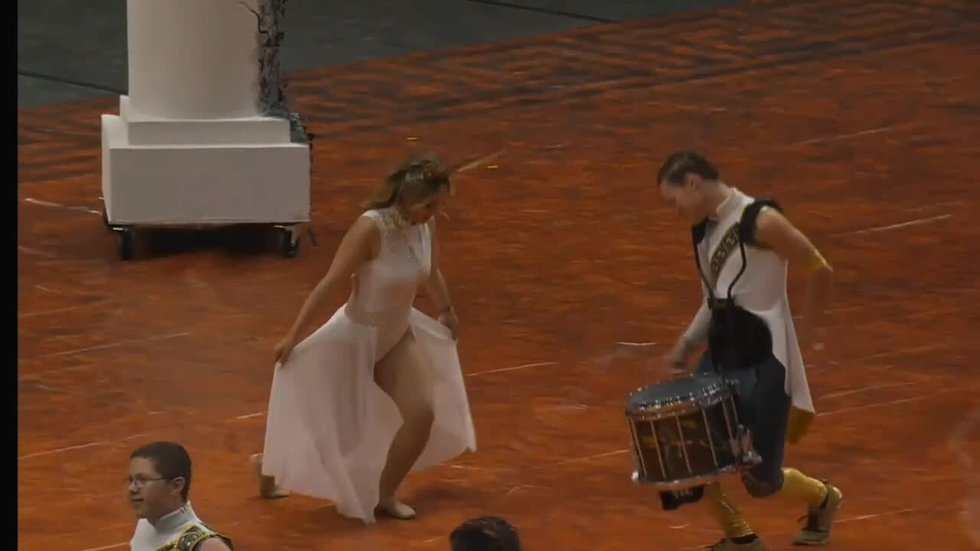 The eight-hour overnight bus ride home was pretty quiet. But on the last few miles of the trip on Sunday morning, students looked out their windows to see flashing blue lights.

They received a police escort – as if they were treated like world champions.

After all, that’s what they were.

Clover High School Indoor Drums won hardware and story when they competed at the World Percussion Championships last week in Dayton, Ohio. Specifically, the group won gold in the “Percussion Scholastic A” division, triumphing over 46 other percussion ensembles in their ranking.

This is the first WGI World Championship Clover High School has ever won – and the first time a South Carolina high school indoor drum line has won a WGI Championship.

“We were just going up there, and I wanted to expose these kids to the world championships to see how good these bands across the country were,” Clover drumming manager Ryan Hall told the Herald during a telephone interview on Monday. “We had a lot of eighth graders in the group and a lot of freshmen.”

He then added with a laugh: “We just went up there to have fun. And to be exposed. And then when we started winning, I was like, ‘What’s going on?’ »

The event was organized by the Winter Guard International (WGI) Sport of the Arts, an internationally renowned non-profit organization that has been running color guard, drumming and indoor wind competitions for 45 years. Last week’s event drew 400 drumming performances of varying skill levels and brought together schools from New Jersey, Indiana, Pennsylvania and other states.

The Blue Eagles, with their final performance on Friday night, hold the second-highest all-time score in WGI finals competition history – a 97.800.

On Monday, when sophomore quadruple percussionist Logan Smith was asked about his Dayton experience, he let out a disbelieving chuckle: “Where do I start?

“I went there hoping to have fun,” Smith told the Herald. “But this trip I will remember all my life.”

The Clover indoor drums sent to Dayton had been rehearsing together since the start of calendar 2022 and had been performing at different events since February, Hall said.

The band performed “Medusa” – a show based on the Greek mythological character who was a beautiful maiden with a fatal gaze: she turned anyone who crossed eyes with her to stone.

As the WGI judges wrote on Clover’s scorecard: “The performers shielded their eyes to avoid being turned to stone, including a completely blind drum section of the drums. The music became much more intense and dramatic to further highlight the stark contrast, reaching the climax where Medusa’s head was severed, ending the Greek myth of Clover with a bang.

Hall said he and his team just wanted to design a show that his kids could take part in, one that perfectly blends dance, drums and scenery, challenging and fun. Hall was aided by “the best design team in the country,” he said. Among his team members: Andrew Markworth wrote the music, Noah Bellamy was the team’s drill designer, and Kaitlyn Hall handled the choreography.

After a few regional meets earlier in 2022, Hall said Clover entered the World Championships in Dayton ranked seventh in his standings (Percussion Scholastic A).

The group’s objective was simply to reach the final, which was to take place on Friday evening. But Hall remembers his team feeling discouraged Friday afternoon after an out-of-sync performance in the semis.

“We were at the hotel around 2 p.m. Friday, just in our beds resting because we were so tired, and then the scores came out on our phones,” Hall said. “And I just heard that roar coming from the other side of the hotel. It was all the kids who discovered the scores for which we finished first in the semi-finals.

“I ran out of my room and into another,” Smith said, “and everyone gathered in that room and started jumping and screaming.”

And once the final arrived, with the team rejuvenated and refocused, Clover prevailed.

“When they announced that we had won first, it was like a breath of fresh air because we had done all that hard work,” said Mackenzie Pearson, head of Clover’s front set section. “We lined up in front of everyone, and all of our directors and staff gave us a medal, and we all hugged, cried and took pictures.

“I’ve been drumming indoors since 2017. So it was like, ‘Wow, this is my last high school experience here.’ It was so satisfying, and it brings me so much happiness, I don’t think I’ve had a better week in my entire life.

In addition to Clover, four other groups from South Carolina won medals this weekend. Two of these groups, like Clover, are also from York County.

Clover will give a final performance Monday at 7 p.m. at the CHS main gymnasium. All are welcome to attend, Hall said.