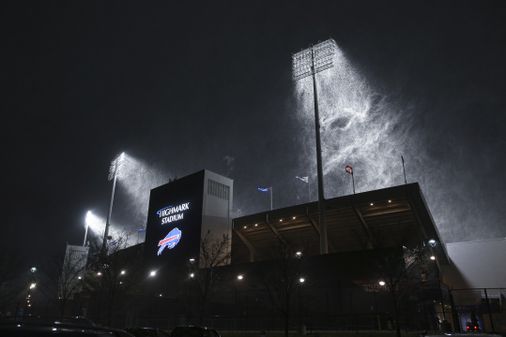 When weather and football collide, it represents the heart of what we love about the game.

Throughout the long history of the NFL, cold weather games, especially those in the playoffs, have been among the most revered and memorable. Well Named.

With all my sympathy for the players and coaches who brave the elements, while acknowledging that my cold weather playing experience has been limited to a warm sofa at home, a heated press room at games and only the need casual to walk outside, there’s just something about the aura of a game played in sub-zero temperatures that makes it extra special.

These games have three fighters – one team on one sideline, one team on the other sideline, and then the elements. Yet even as teams can prepare game plans, script their play calls and depend on the familiarity that for fellow AFC East foes New England and Buffalo is particularly present in this third meeting of the season, there is no weather control. It’s a great equalizer, conditions that keep the game honest and get him back to his roots of keeping ground, hitting hard and running first.

But there’s a price to this brand of football – just listen to former NFL defensive lineman Marcus Spears, who described it this way on ESPN: “It’s just psychological, man. When playing in this type of weather, every hit feels like you’re being electrocuted. That’s what it feels like, with your body telling you that you’re the dumbest human being on earth for doing what you’re doing right now.

The difficulty is obvious. Players will do anything to stay warm, heated benches, large overcoats and layered clothing. There are other less obvious tricks – and no, I’m not even going with Bart Scott – like thin layers of petroleum jelly applied to the skin to trap heat.

These are fine in “normal” cold games. Freezing temperatures predicted for Saturday night could put it among the coldest games on record, setting it apart from the type of sub-freezing conditions that turn football into a rock, hard and slick and difficult to hold on to. Throwing is hard, hitting hurts more, sensations go away, and the brain has to fight just to focus.

Still, players seem to relish it.

“It’s mental — just like it’s mental to practice in the heat in the offseason,” veteran offensive tackle Trent Brown said. “At the end of the day, it’s football. It’s cold.”

Cold and memorable. Some of the Patriots’ greatest memories came in cold weather, including the Tuck Rule game which might be most famous for the non-fumble that kept Tom Brady playing, but which is equally impressive for both kicks that Adam Vinatieri made while whirling. snow. One to level the score in the dying seconds, the other to win it in overtime, letting Belichick call them two of the best kicks he’s ever seen.

Time makes them better. Before the Giants could upset the Patriots’ perfect season in the Super Bowl of the 2007 season, they had to beat the Packers in Green Bay in the NFC Championship Game. That game, played in minus-4 conditions that looked like minus-24, left then-coach Tom Coughlin with a permanent red stripe on his wind-stained cheeks. Of all the moments players remember most from that game, the cups of hot chicken soup at halftime are still among them.

From the Ice Bowl to the Tuck Rule, from last season’s Pats-Bills game played in 50-mile-per-hour winds to this joker contest, the weather is a welcome enemy. Every meter gained will be a victory against the elements.

“As one of the older guys, I’ve been in a lot of those games where you don’t want to be on the outside,” Patriots veteran safety Devin McCourty said. “You go out and try to have fun. And I’ll tell you, it’s a lot more fun to win in cold weather.

Tara Sullivan is a columnist for The Globe. She can be contacted at [email protected] Follow her on Twitter @Globe_Tara.