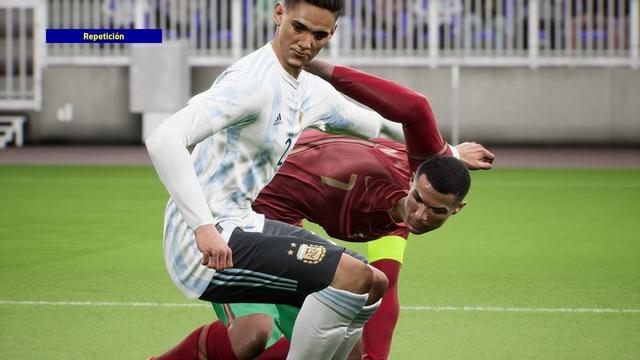 eFootball. Well what else can I say about it? It’s not even a complete game. It’s an online demo – and it’s bad for it. I can write quite a post about the way it’s played, whether the fans move at 15fps, the weird faces players slide, or the basic PES functions like pressing a second player to make you can close the scroll lines yourself, in the old dirt. But what is the meaning of wasting words in this game? I don’t even want to continue with this, let alone restart this game. The half-baked roadmap doesn’t give me any reason to keep this game on Xbox, either.

In its most positive form, eFootball reminds me of the PlayStation 2 era, when games like This is Football, Club Football, David Beckham Soccer and Ronaldo V-Football at times frantically tried to break EA’s duopoly with FIFA. . and Konami with Pro Evolution Soccer. Without success, of course, because it is precisely by launching the football game year after year that FIFA and Pro Evo have been able to gradually improve and strengthen the brand awareness.

The only significant difference: Konami isn’t a newcomer, and now it’s bravely taking on a sidewalk beer. He has been the developer of the world’s best soccer game for decades. So it’s amazing to see Konami throw away all of its legacy with eFootball, right down to the name.

This is how eFootball puts us in a difficult situation. As Fifa 22 isn’t exactly anything to write home about, it lacks a good football game this year. Or is there one? While testing eFootball, I restarted PES 2021 to be able to compare the two properly. Immediately I noticed again how good the game is. Sometimes you don’t know what you have until you have to miss it.

Particularly noteworthy is the harmony with which your team moves and the authentic style of your teammates. Close to the player with the ball, they run alone to create playing opportunities, or even to determine where they want the ball. Not because Random_Animation_26 was launched, but because there really is a possibility. I don’t play alone, but really with a team that thinks for itself.

Additionally, PES translates my input on the console to an unfiltered screen. I have to time a shot or pass myself, taking into account the speed at which the ball is moving, the angle at which someone is approached, the quality of the player in question, if he is is a left-handed or a right-handed, etc. If you are successful, fireworks will appear on the screen. The Space Pass isn’t usually for Wubbo Ockels (Sierd de Vos fans got it), but exactly what I had in mind. There are no rules and texts, only the laws of nature.

After all, if I’m wrong on time, I’ll pay for it. Do I hit the bullet hard in the barrel? Then it is possible that the player will not be able to take the ball perfectly and have to creatively tap the outside of their shoe. Sometimes things go well, sometimes not. It’s football. In any case, the player does not lean improbably to take the ball perfectly with the inner part of the foot, only to perform an impeccable circle at the intersection with the R1 + O. PES is not graceful for his external appearance. Sometimes it’s nice to see, but it’s practical. Suitable for the context.

On its most positive note, eFootball reminds me of the PlayStation 2 era

Another example that PES 2021 is more contextual than the other foot: there is no separate button to protect the ball. It is not necessary either. If you dribble slowly and place your body between the ball and the opponent, you automatically protect the ball. This is what footballers do. But that doesn’t happen in a full race. Context-sensitive things like this make PES 2021 incredibly smooth, organic, and realistic. It really isn’t the prettiest game, especially when it comes to player faces. But the animation and especially the movement of the feet (so essential in the game of football) is still unmatched. There’s no need for HyperMotion machine learning nonsense.

I would also prefer Konami to improve this game and make it a little better. Sometimes the ball goes with the foot, the refs can always do a better job and I would have liked to see a true next-gen version of PES. But it only took one pot to rekindle my love for PES 2021. So you know what? Find out with your new feet. I’m playing PES 2021 again this year and can recommend it to anyone.