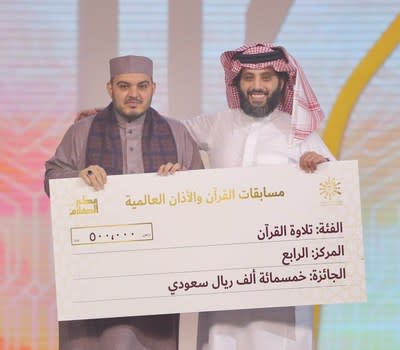 Mousavi added that he intended to go to Morocco learn the type of Warsh recitation according to Nafie, and other recitations, to add more aesthetics to the recitation. He thanked General Entertainment Authority Chairman of the Board, Turki Al-Sheikh, for launching the initiative, noting that the unprecedented hospitality and organization he witnessed during the competition was to the height of the highest international standards.

During the pre-final stages of the competition, Mousavi competed in difficult and demanding trials, which included a group of the sweetest and most beautiful voices reciting the Holy Quran, until he finally managed to win the votes of the jury, which includes elite specialists. to judge Quranic competitions, muezzins of the Two Holy Mosques, seasoned international reciters and renowned judges of international competitions.

Mousavi started reciting the Holy Quran at the age of 6 with the encouragement of his father, then began to imitate the voices of some sheikhs and reciters, including Abdul Basit Abdul Samad, Mustafa Ismail, Mohamed Ahmad ChabibAl Minshawi, Mahmoud Ali Al-Bannaand others.

During his school years in the city of Ahvaz, Iranhe has won first place in several student competitions for the Holy Quran in schools, in addition to other national-level competitions in Iran.