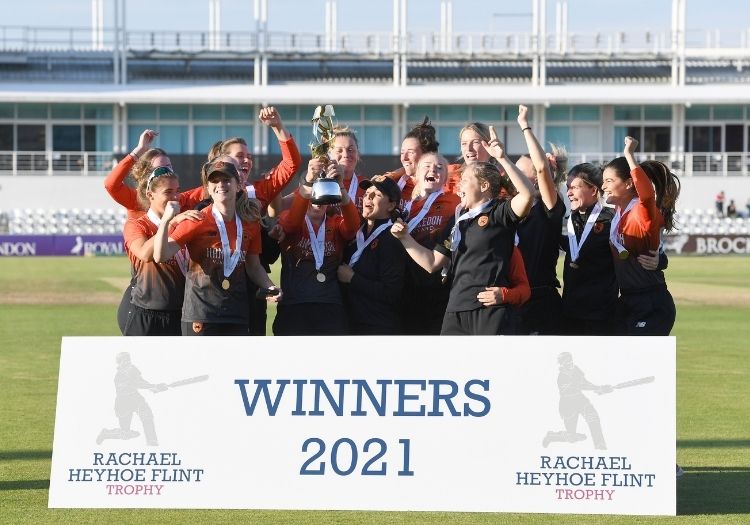 Heyhoe Flint Trophy: These are the high stakes moments English cricket needs this tournament to produce

NICK FRIEND IN NORTHAMPTON: It was a lesson in crossing the line given by a team that doesn’t lose often: 109 for 7 was a dark and hopeless place – an hour later boundless joy sprang from a must-have dugout canoe for its luminosity Orange viper

The fact that Eve Jones did not make the Rachael Heyhoe Flint Trophy Final was no small feat for her own season; the 29-year-old was the competition’s third-highest scorer, having previously finished the Charlotte Edwards Cup at the top of the same list.

She fell cheap on Wednesday when Central Sparks met Northern Diamonds at the eliminator stage, but it was their first score below 31 in a month. And without his reassuring presence, his team failed to reach a competitive total and were downright beaten. At the forefront of Diamonds’ response was Ami Campbell, 30, who hit 76 in mid-range to secure a final spot, doing so against a bowling attack showcasing the much-vaunted talents of Issy Wong and Emily Arlott, who have both been involved with England – in one way or another – for the past 12 months.

Campbell resumed this counterattack against Southern Vipers for 60 out of 73 balls – a move that should have won his team a first title the third time around, the Diamonds having appeared – and lost – in every final since the regional overhaul. She reduced her team from 116 for 8 to 183 – a total that seemed to be enough. But winning is a habit. And no sooner did the Diamonds come close to the finish line thanks to three Jenny Gunn wickets, than the Southern Vipers did as the winners. The tension rises, the dashboard advances, the errors become more and more frequent.

The dizzying encouragement between defensive players turned into more frantic support. Emily Windsor, who hit just one limit on her first 80 balls, punched for almost two hours and played the role of chief heroine. Tara Norris added the necessary dusting of fearless stardust, sweeping a border upside down to finally shatter Diamonds’ spirit. They added 78 points in 15 overs to pull off a remarkable heist with two balls to spare. A line-crossing lesson given by a team that doesn’t lose often: 109 for 7 was a dark and hopeless place – an hour later, boundless joy springs from a must-have dugout for its luminous orange Viper. They are the only team to have received the Heyhoe Flint Trophy.

To return briefly to Jones, however. It was confirmed on Friday that she will represent the Melbourne Renegades in this winter’s Women’s Big Bash – a significant achievement for an uncapped English cricketer, given the tournament’s status as the best of its kind, although its arrangement was facilitated by the initial prospect of unavailable English players in due to the now canceled tour of Pakistan.

Nonetheless, it’s also a nod to the overhaul of England’s national game that its regional competitions – not to mention The Hundred, where only Dane van Niekerk, Jemimah Rodrigues and Sophia Dunkley have scored more points – have the effect. discount. And ahead of an Ashes streak early next year, a decent campaign just might open the door if Lisa Keightley is looking for an aftermarket hitting option with recent form and experience on Australian surfaces. England must send an A team to play simultaneously. 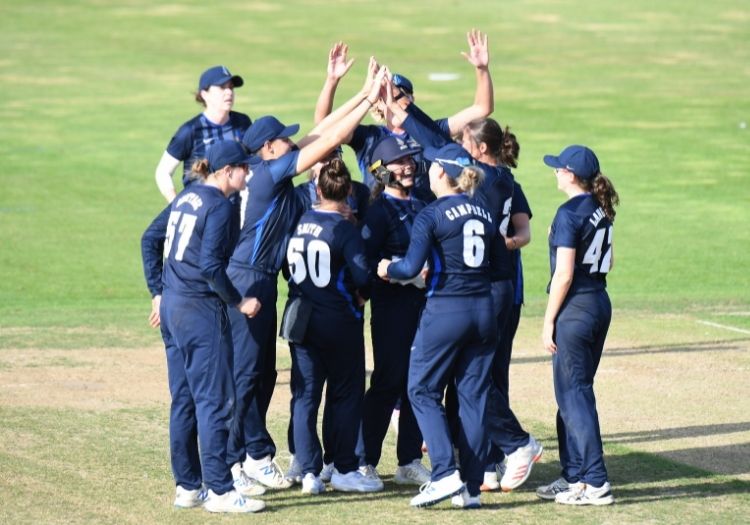 Jones’ summer was over before today, but his imprint was visible in a cup final featuring many of the Tour’s top players under the national configuration. This has been interesting to watch, as the perception is that the regional restructuring has been done with the next generations in mind – to ensure that more cricketers of international potential come onto the scene via academy channels and move on. stand out in a competition deemed sufficiently difficult. that he produces players ready for England.

This is true, without a doubt – the long term future demanded a more streamlined system, and this is what the game now has at its disposal as English cricket seeks to follow Australia’s lead. As the Vipers channeled their inner Houdini, teens Darcie Brown and Hannah Darlington were between ODI’s victories over India.

But what should not be lost is the value of the Heyhoe Flint Trophy – and his brother T20 – for a more established group, of which Jones is certainly a part. The fact remains that in the last decade only one player has made her England debut after the age of 25 – Sonia Odedra in her solo appearance against India in 2014 at the age 26.

But what we saw is an international recall for Tash Farrant, who lost his center contract two years earlier and feared it was the end. She was 24 when she returned home, six years younger than Campbell, who did not land a Hundred contract and is not one of the Diamonds contract holders, and five younger than Beth Langston, which took 13 wickets in the Heyhoe Flint Trophy. She won the most recent of her six international caps in 2016, but was an unused member of England’s World Cup-winning team in 2017.

She beat Georgia Adams with the second ball from the sleeves, pinning her stump to give Diamonds the key wicket captain of the Vipers, who last year single-handedly won the final between the same two teams at Edgbaston.

“A few years later I think I’m a better cricketer now than I was when I last represented England,” Langston said earlier this month. She found a steady swing with the new ball away from the right-handers – the delivery that made Adams recoil from the seam for good measure. 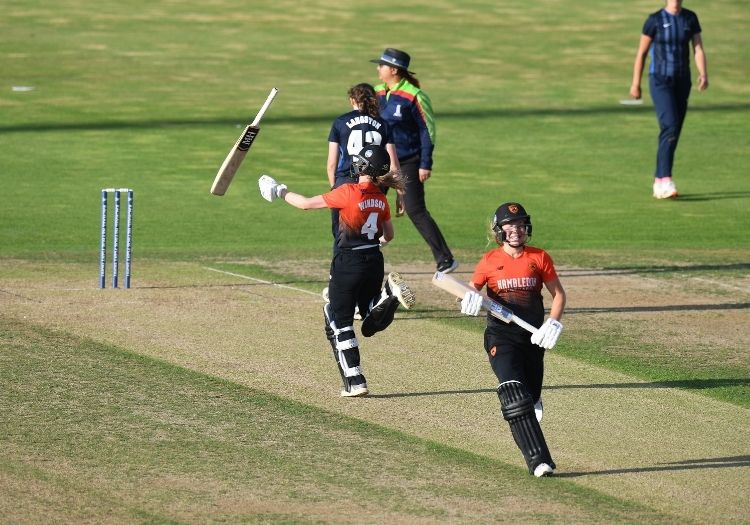 Emily Windsor was the hero of the Southern Vipers, who retained their title

It was a solid reminder that there is little substitute for experience, that despite all the emphasis on youthful exuberance and the arms race for the next generation star, the opportunity to stand a full time focus on cricket has helped people in their late twenties just as much. than those of a decade younger. Athletes develop at different rates and peak later than when most made their international debuts.

Take Adams, for example; his duck – his first as an opener in two seasons of regional competition – was offset by a four-wicket transport that spoke of his off-spin development, having been surprised early last fall when his Charlotte Edwards’ post-season schedule was designed to feature a block determined to improve with the ball. The result? Twelve wickets at 14.41 each in this year’s tournament.

She was ultimately indebted, however, to a pair of less experienced cricketers, for whom today has proven so successful and whose pressurized bottle speaks so clearly of the development aspect of the regional structure’s goals.

Norris, 23, born in Philadelphia and named last week to the United States squad for their T20 World Cup qualifying tournament against Argentina, Brazil and Canada, is already an established player with the ball. She took two wickets here long before her batting exploits started off by avoiding a hat trick. Windsor, 24, added a second string to her bow as a BBC radio presenter and has been a regular in Hampshire since she was a teenager.

Given the scene – and their opposition’s experience – their valiant and skillful rearguard might just be the best publicity to date for this 50-year competition. Windsor was rightly recognized as the player of the match; his wake was stoicism embodied, starting at a pace that seemed to benefit no one, before seeing Gaby Lewis, Paige Scholfield and Carla Rudd fall from the discomfort of the non-striker ending. She didn’t panic though, just hiding in the background and waiting for her opportunity. She finished undefeated on 47, including only two limits in the 97 balls she faced. Norris was faster: she hadn’t gone out of 40 out of 44 deliveries. But neither could have succeeded without the other.

“I guess it was just pure desire,” Norris said afterwards. “I didn’t want to leave the field before the end of the game. I was devastated that I didn’t cross the line in the Charlotte Edwards Cup and I think it was in the back of my mind. I knew I didn’t want to feel this anymore.

Please make sure all fields are filled out before submitting your comment!

Taekwondo: Ending Child Marriage in Zimbabwe, One Step at a Time | Rights of the child