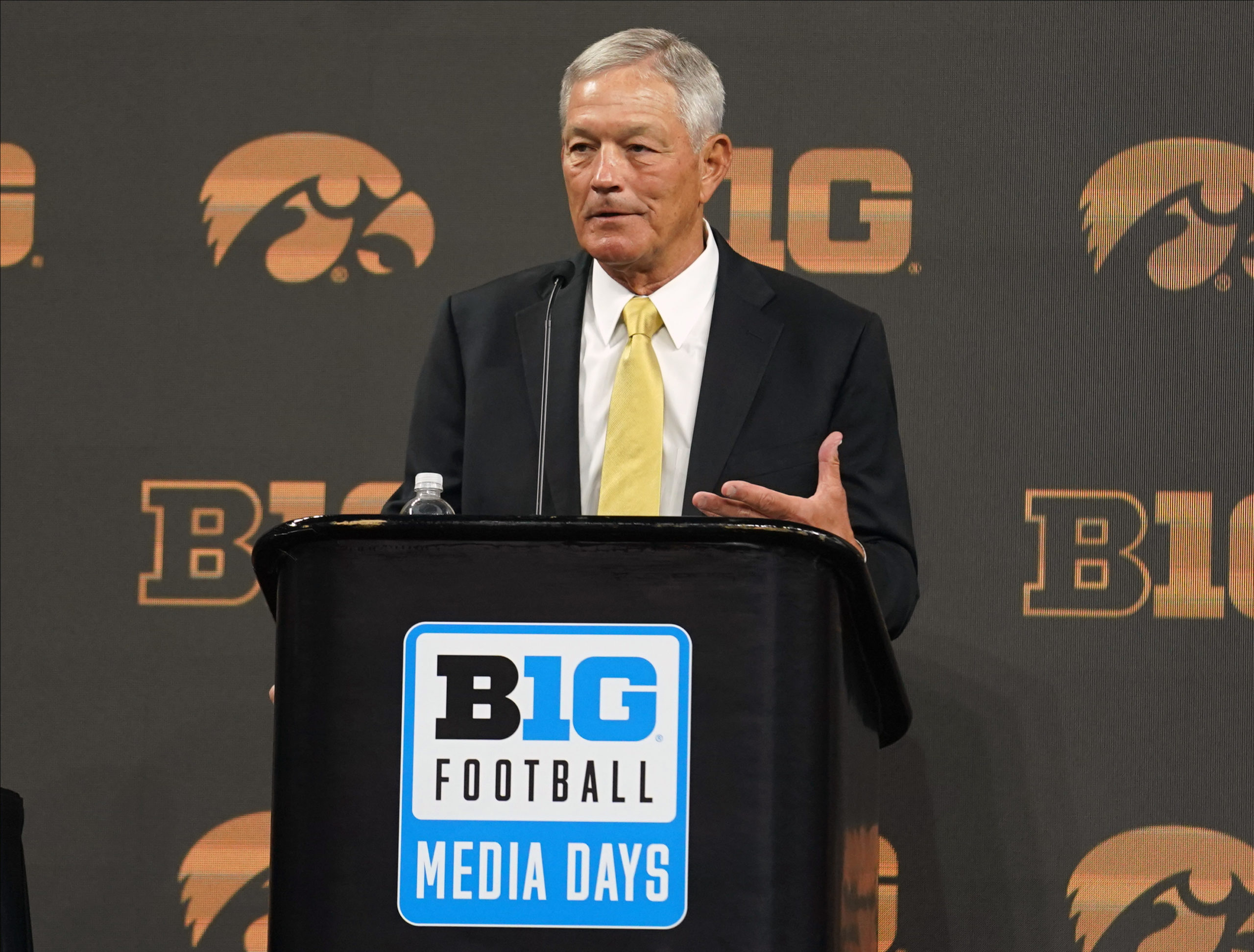 INDIANAPOLIS — Kirk Ferentz has seen just about everything when it comes to the Big Ten, or college football in general.

With 23 years in Iowa, Ferentz is not only the dean of Big Ten coaches, but of all FBS. And his experience goes far beyond that. From 1981 to 1989, he was Hayden Fry’s offensive line coach for the Hawkeyes.

To say how long ago 1981 was in terms of college football, the Ivy League was still considered a Division IA conference that season. Lee Corso was always a trainer rather than a guy trying on mascot heads. The Rimington Trophy was not awarded to the top center in the nation because Dave Rimington was still playing at Nebraska.

No active coach has more first-hand knowledge of what college football was like. And because he’s still an active coach, Ferentz is also acutely aware of what the game is becoming.

I know what you’re thinking – “the old man shouts at the cloud.” But when discussing topics ranging from Big Ten expansion to the college football playoffs to NIL at Big Ten Media Days, Ferentz showed he’s hardly stuck in the past. His frank and thoughtful perspective was really very refreshing.

Ferentz’s thoughts on the Westward expansion of the Big Ten

“The biggest surprise for me was that he remained silent. It must have been a small circle. It seems like everything is leaked these days.

“The clear message to me is that geography and tradition don’t mean as much as a lot of other things, with television probably being at the forefront. It’s just the way college went. Penn State joined in the 90s because of football. Nebraska probably the same, and further expansion. The game has changed a lot. The things that drive college football have changed.

“I’m at the point right now where nothing surprises me or would surprise me.”

How he sees the addition of USC and UCLA

“These are two names that everyone knows. Well, those aren’t names, I suppose, but letters. 3 and 4. I understand. But when you were a kid, you knew about UCLA and USC. I think it makes a lot of sense – other than geography. It just doesn’t make sense there.

“And the impact of what it will do on the Rose Bowl, which it has traditionally been. But the trend in college football right now, tradition isn’t what it used to be. At least not on the priority list. Like it or not, this is the world we live in. So embrace it.

“It’s just the world we live in now. It has become an entertainment business. It will be revenue driven. I joked that I don’t know how the NCAA works. But I’m pretty sure television predicts the future. What television wants will materialize, especially when new contracts arrive. And it’s not just football.

“There’s probably no sense in worrying about it. And it certainly doesn’t make sense to someone my age to think of USC or UCLA as Big Ten rivals.

Why he’s glad he’s not coaching USC or UCLA

“I can’t imagine the trip. Coming to Iowa is going to be a home game for these guys versus crossing the country.

Why keeping divisions (or not) won’t matter to him

“One thing I’ve noticed is that when you’re past the round robin, you can’t make everyone happy. There’s going to be some bullshit with any format we use. I guess as a manager just tell me the 12 games I will play and I will prepare for those.

On the expansion of CFP

“Probably the biggest question I have [with expansion] how are you doing at school? I spoke to the guys at North Dakota State, and they did a good job, because you pretty much professionalize your team in a way by going up to 16 games. And these guys still have to go to class.

“The other thing I was focused on is what it did to the bowl system. I know we’re in the entertainment business, but if you’re not in the 12 when the first CFP show comes out, you’re kind of like minced liver. No one really cares.

Why the lack of NIL regulations concerns him

“Just read the headlines. There is a real lack of structure and framework in our sport at the moment, which I find worrying and dangerous.

“NIL is a great initiative conceptually. But there seems to be potential for a return to the haves and have-nots. And we always will, but the degree of separation has the potential to accelerate.

“I don’t think it’s a great look when you have national coaches [Nick Saban and Jimbo Fisher] bicker in public. I’m not judging anyone, but I’m not sure it’s good for our sport collectively. And our transfer policies are a bit of a concern too. That being said, I don’t think any of us want anyone on our team who isn’t happy. It’s just a bad marriage. So there’s so much on the horizon.

“I’m sure a lot of us don’t know what the rules are and how they work. And I’m not sure that’s healthy. We just have such a good game. I would hate to see it implode or suffer a setback if things get too loose.

On how NIL affects recruitment

“How do I know he has a market of $100? What does the contract actually say? Is it guaranteed? There are a lot of gaps in there.

“It looks like there’s probably a better way to do this while still rewarding the players. Hopefully we’ll get to that point.

Tickets for the 2022 Redbird football season are on sale now