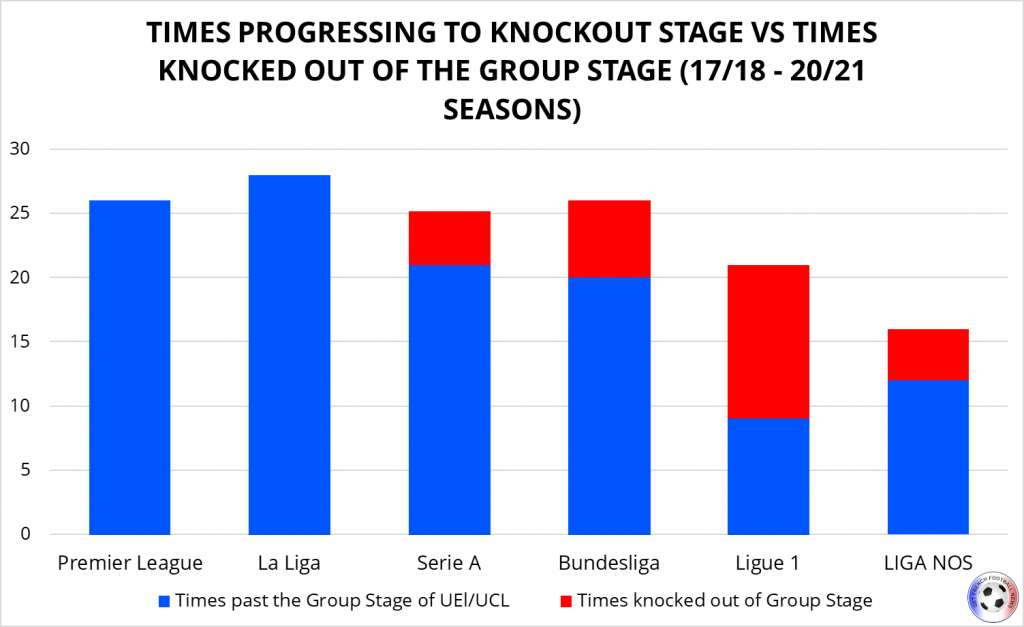 French football has often been considered the weakest of the five big traditional leagues in Europe. A week ago, Portugal overtook France for fifth place in the UEFA Coefficient ranking. “Lionel Messi no longer plays in a top five of the European championships! read a tabloid headline. However, UEFA coefficient rankings are a misrepresentation of overall quality. Although the coefficient system can be used to show some anomalies in French football, it is not so useful for the league quality debate.

The UEFA league coefficient ranking is calculated based on the European performance of clubs in each country, awarding points for victories at different stages of the Champions League, Europa League and Conference League. For example, reaching the group stage of these competitions is worth one point. Qualifying for the knockout stages of the Champions League is four points, and winning a knockout game means three points.

Chelsea collected 33 points in winning the Champions League 20/21, but their score was averaged with the scores of Manchester United, Leicester City, Manchester City, Arsenal, Tottenham and Liverpool from last season to give England a final point total of 24.357. UEFA counts the scores of the last five seasons, including the current campaign, to arrive at its current ranking. So far, England lead with 87.9 points, Spain are second at 80.6, Italy third at 63.6, Germany fourth at 61.427. Next come Portugal and France, currently separated by 0.635 coefficient points.

Porto assisted Portugal by reaching the Champions League quarter-finals on 20/21 and 18/19, while Benfica and Sporting have also collected 103 points in the current scoring period. Sporting, Braga, Benfica and Porto all played the Champions League or Europa League every year between 17/18 and 20/21. Portuguese football has seen eight teams play in UEFA competitions during this period – while France have had 11 different representatives since 17/18, with Paris Saint-Germain being the only team to consolidate a place in the French top four through the coefficient window as the Ligue 1 top four changing in each of these campaigns.

All of this suggests that Ligue 1 is more competitive than Liga NOS and that Ligue 1 teams are ill-equipped to challenge multiple competitions. By broadening the comparison with other major European leagues, a pattern begins to emerge. In the current coefficient window, four Spanish teams, six teams from England, five from Italy, three from Germany and four from Portugal have qualified for Europe each year. Crucially for France, only PSG have made Europe each season.

It seems that the French teams have failed to balance national progress and competitiveness in European football. Teams like Sporting and Braga have managed both, although they are not the ultimate engines of La Liga NOS, while the uneven form of Lyon and Monaco has hurt France’s production in Europe. This is hardly a damning indictment of the quality of Ligue 1. In fact, it is an endorsement of its progress. While the dominance of PSG is often seen as the primary weakness of Ligue 1, French football actually lacks a real monopoly of power as there are no other truly consistent heavyweights.

Lyon, Monaco, Lille, Rennes, Marseille and Nice have all fought for the three places in the Ligue 1 Champions League, but they lack dominance over their domestic rivals. This competitive balance in French football inevitably leads to neglect of European competition. It’s a simple concept that touches everyone. Take Leicester’s Europa League game against Slavia Prague last season. They had drawn 0-0 away in the Czech Republic in the round of 16, preparing for a home victory. In Harvey Barnes, Ricardo Pereira and Timothy Castagne, Leicester had the quality to see them at home. Except they were also in third place in the Premier League and were due to face Arsenal three days later. So Barnes, Pereira and Castagne were all rested and Slavia beat a distracted Leicester 0-2.

On the other hand, teams like Bayern Munich, Manchester City and PSG can take advantage of this dilemma. With a national monopoly, they can afford to do the opposite, leaving the players in the league to allow domination in Europe.

Meanwhile, unlike other big leagues, teams that are successful in France often use that success to drive player sales. This means that a team that has qualified for Europe at the end of a season starts the resulting European campaign as a very different, often very weakened team. Current Lille champions survived the summer relatively intact but still lost inspirational coach Christophe Galtier to Nice while AC Milan signed goalkeeper Mike Maignan and Boubakary Soumare joined Leicester. The arrival of prospect Amadou Onana in midfield and untested Ivo Grbić in goal as well as the shock appointment of Jocelyn Gourvennec as coach hardly represent any improvement.

Even the use of European performances as a means of defining the quality of the league is a questionable measure. Competitiveness and player quality are other popular metrics that are often highlighted in this debate. With Ligue 1 comfortably the youngest league of the big five, it boasts exceptional young talents. However, when fighting for a limited number of spaces in the Champions League, Ligue 1 teams tend to prioritize domestic performances. That’s not to say that a likely additional spot after the 2024 Champions League reforms will allow French football to flourish immediately. There are of course thousands of factors that determine the outcome of a Champions League or Europa League draw.

Ironically, Ligue 1’s financial woes could end up being its savior. The fact that Montpellier duo Andy Delort (Nice) and Gaëtan Laborde (Rennes) both left for other French clubs with rich backers shows that the richest teams in Ligue 1 could start to take control. National harmony is out of balance as French clubs rich in cash take advantage of the struggles of their rivals.

If this process continues, French football could improve the ranking of coefficients. Perhaps, however, Ligue 1 fans can miss out on what has been very entertaining the past few years with any team capable of qualifying for Europe. Meanwhile, with a season of points available for a PSG led by Lionel Messi and a strong group of Europa League representatives in Lyon, Marseille and Monaco, Ligue 1 could overtake Portugal’s lead of 0.635 by l ‘next summer. Be that as it may, the history of French insolvencies in Europe is more complex than the 43.581 coefficient points suggest.