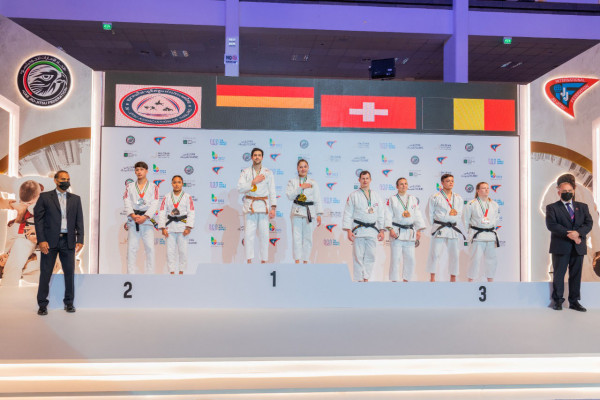 Abdul Monem Al Hashemi, president of the UAEJJF, held a meeting with Theodoropoulos, which was attended by officials from national and regional federations.

During the meeting, Al Hashemi underlined the support of the UAEJJF for the re-election of Theodoropoulos as president of the JJIF.

The congress of the international federation will be held tomorrow morning in Abu Dhabi to elect its president, and discuss several topics related to the future of sport.

At tomorrow’s meeting, the General Assembly of the JJIF will be informed of the agenda of the championships organized from 2018 to 2021, in addition to the plans of the regional federations to develop the sports and event calendars for 2022-2023. The congress should also approve the hosting by Abu Dhabi of the 27th World Championship in 2022, at the request of the national and regional federations and in view of the significant capacities of the capital to organize major tournaments.

Hosting the congress in Abu Dhabi on the sidelines of the Jiu-Jitsu World Championship underscores its leading global stature as the capital of jiu-jitsu and international decision-making.

“It is not easy for a country to host a world championship like this under the current circumstances. We appreciate the role of Abu Dhabi in hosting the championship, which has a large turnout, and we appreciate the support given to delegations in terms of obtaining entry visas, transporting them to their hotels and performing medical tests. We thank everyone who made this event possible, “said Korn.

“We are honored to visit Abu Dhabi again and we are very grateful to the event organizers at UAEJJF and JJIF for hosting this major event, with the participation of over 6,000 athletes,” said Suresh Gopi.

Joachim Thumbart noted that 55 expert referees will lead the championship, and Hawk Eye will be used to resolve tough appeals.

“The competitions have started on a very strong note, and there is great rivalry in the preliminary rounds between Austria, Germany, Thailand and Montenegro. As for the ‘newaza’ category, which has not started yet, we expect the UAE team to be a tough opponent as they hold the title from the previous edition and have prepared well for the tournament, “he added.

The Jiu-Jitsu World Championship is also celebrating Expo 2020 Dubai by displaying the event logo in prime positions inside the arena, while the UAEJJF will offer fans the opportunity to visit the Expo 2020 Dubai.

The championship also celebrates the UAE’s Golden Jubilee by handing out flyers at the event. The organizing committee offers free medical tests to participants and visitors on a daily basis.