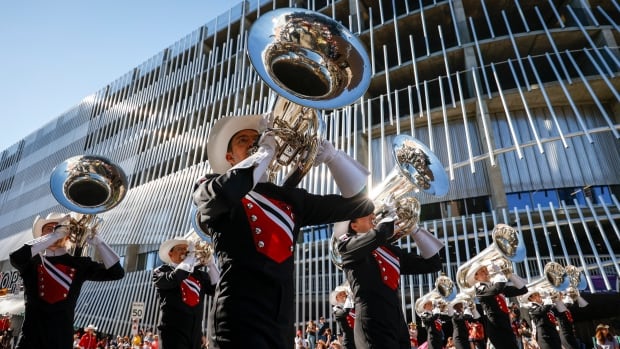 Last week, the Calgary Stampede Showband traveled to Indiana to compete for the first time in the Drum Corps International (DCI) Championships, the world stage for marching ensembles.

On Tuesday night, they were named world-class champions in Marion, Indiana, kicking them off to the world championship in Indianapolis on Thursday.

“The organization has worked really hard to get to this point and has put in a lot of hours, not just rehearsing but designing and getting the right members together,” said showband instructor Josh Malate. .

“Bringing these members and students to get to this point has been truly amazing.”

Bria Laurendeau is color guard for the Stampede Showband. As part of her role, which she describes as “dance-related”, she uses equipment like flags and guns to better tell the show’s story.

She says there’s a strong walking arts culture in the United States and it’s amazing to be recognized as the world-class champions – especially because their competitions have been shut down during the pandemic.

“It’s cool to see other people recognize the hard work we put into our shows. Just seeing it all pay off has been really rewarding as a member,” Laurendeau said.

She says that since June, the showband has been training 12 hours a day to prepare for this competition.

“Everyone came off the court and they were hugging and crying. It was a really heartwarming experience,” Kozakoff said.

The Stampede Showband was the only world-class ensemble to travel to Indianapolis for the DCI’s greatest competition – the DCI World Championship.

The group competed on Thursday, but did not reach the next round. They have completed 26 of 35 sets.

Until then, they will take part in the SoundSport International Music & Food Festival, where they will compete against about 10 other ensembles.

The showband’s drumline will also be competing against approximately 10 other drumlines for the DrumLine Battle Festival today.