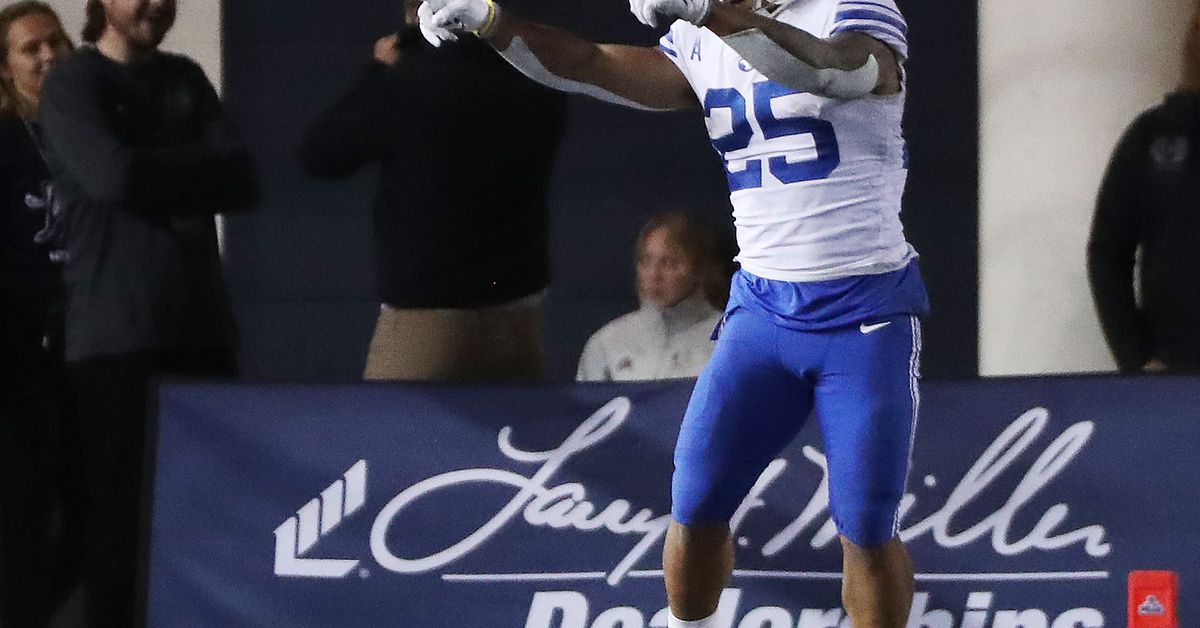 BYU football’s No.10, Tyler Allgeier has been relentless and reliable

Tyler Allgeier stood outside the locker room on Friday after BYU defeated Utah State to fulfill a post-game media engagement. He was excited. He was at ease. He was humble, kept it simple, and he was exhausted.

Allgeier became the poster boy for BYU football, his antics quickly becoming the fodder of the video vault. In a school where a quarterback normally takes on this role, all of these guys have been assaulted and change playing time for the Cougars ranked 10th and 5-0.

Allgeier referred to a BYU mantra from recent seasons, a sort of code used by head coach Kalani Sitake and his team on what is asked of players on the program.

He used the words reliable and relentless.

We have heard these words over and over again in conversations with coaches and players.

You never hang around in any of your first five games, you are always reliable. The same could be said for playing defense or attacking and constantly having the other unit’s back.

You beat the Pac-12’s No. 1 offense and defense (Arizona State) and that league’s No. 2 defense (Utah), and you can be relentless in the trenches and other areas.

If you look at a squad filled with players who consistently show a solid foundation, win on quick plays, only have two turnovers in five games (second nationally), and win with a balanced attack and aggressive play calls. on both sides of the line it’s pretty reliable. So far, in 2020 and 2021, BYU has thrown 46 touchdowns with just 6 interceptions.

You take out starting quarterback Jaren Hall, offensive linemen Harris LaChance and James Empey, main tackle Keenan Pili and starting cornerback Keenan Ellis, and their saves play at a high level. It could be reliable.

Where is all this change in football culture at BYU coming from?

It all started with Sitake focusing on the physique, recruiting for that physique from developing players, having his conditioning program identify weightlifting numbers gains, and then watching him hatch. BYU kicks the trenches and it filters through every aspect of the program.

Former BYU quarterback turned radio analyst Riley Nelson immediately understood that with this team, now 16-1 over the past two seasons. “The biggest change, in my opinion, is their culture of recruiting linemen,” said Nelson.

“Not just the top talent, but the depth. The defensive line spins 10 guys consistently, all of whom have played. “

In the radio booth, Nelson says play-by-play voice Greg Wrubell has a scouting board, which he uses to determine who is on the field at what position at any point in the game. “Half of that board is defensive linemen,” said Nelson.

Nelson points out that the Cougars were missing two offensive linemen against Utah State last Friday night in Logan. One of them was Empey, an All-American freshman and team captain.

“It wasn’t a big deal because two other guys stepped in and paved the way for a 200-yard rusher. In years past, I don’t think there is a way to injure the key guys or spin the guys so hard to keep them cool, and not see a noticeable drop in production ” , did he declare. “I think there has always been a culture of physicality, but this culture needs to be supported by guys who can transmit this culture on the pitch.

“In football that means big, strong maulers that set the tone for the rest of the team and allow all the good guys (who get all the attention) to be successful,” said Nelson.

Allgeier is ranked 8th nationally in rushing rushing and 9th in rushing yards per game (113.8). Kicker Ryan Rehkow is fourth nationally with 21 punts for 1,063 yards. BYU is fifth in terms of revenue margin at 1.80. “I credit my offensive line,” Allgeier said.

The one with two missing starters.

Register to receive the newsletter

Get the scoop on your favorite team in this email for true Cougar fans.